20 Years Later, “In the Mood for Love” Remains an Iconic View into 1960s Hong Kong Fashion

How Wong Kar-wai’s "In the Mood for Love" showcases beautiful clothing that represents Hong Kong's blend of Eastern and Western cultures.

This year marks the 20th anniversary of Wong Kar-wai’s In the Mood for Love. Since the film’s premiere at the Cannes Film Festival in 2000, global fashion designer circles have referenced its depiction of 1960s Hong Kong fashion in runway shows and design collections ranging from Italian fashion designer Roberto Cavalli’s to American fashion designer Derek Lam’s.

More than simply showcasing beautiful silhouettes and vivid colors, the clothes and fashion trends in In the Mood for Love visually represent the melting pot of Eastern and Western cultures and economic prosperity in pre-reunification Hong Kong.

In the Mood for Love takes place in 1960s Hong Kong. It follows Chow Mo-wan (Tony Leung Chiu Wai) and Su Li-zhen (Maggie Cheung Man-yuk), who slowly develop feelings for each other while their spouses are having an affair. Drama aside, the characters’ clothing choices convey as much information as dialogue in the film; Chow and Su’s clothing express their personalities and socioeconomic statuses.

Su and other women in the film wear the iconic qipao (or cheongsam). Qipaos were a common fixture of women’s fashion in the 1960s in Hong Kong; In The Mood For Love showcases a rotating variety of colorful and beautiful qipaos that are a visual representation of Hong Kong history.

The late 20th century was a transitional time for Hong Kong. In the midst of the Japanese invasion of China and the Chinese Civil War, many Shanghainese tailors fled to Hong Kong in the 1930s and 1940s. This kickstarted the golden age of the qipao trend.

During the period portrayed in the film, affluent Chinese women often wore complex floral patterns. These custom-made dresses required numerous fittings, and having multiple qipaos was considered a luxury. In The Mood For Love highlights Su’s relatively high socioeconomic status by showcasing how she wears twenty different qipaos. In addition, Su Li-zhen’s qipaos are also of a modern design; they follow Western design patterns, incorporating features such as darts and shoulder constructions.

However, qipaos were not just for the affluent; the modern, Western-influenced design of qipaos also symbolized the start of economic prosperity for Hong Kong’s emergent middle class.

In the 1960s, Hong Kong women started to take on office work—and chose to wear qipaos in professional settings.  Consequently, more middle class women developed the skills to make their own qipaos. They utilized cheaper fabrics such as hemp or curtain fabric instead of silk or lace, so that their qipaos would be more practical for their newfound office work.

Hong Kong’s unique melting pot of cultures also allowed for foreign cultural influences in fashion and consumer culture. Though Japan brutally occupied Hong Kong during WWII, post-war Japan helped shape fashion and consumer culture in Hong Kong; many Chinese in the latter half of the 20th century looked up to goods produced in Japan. Of course, Japan was also in the midst of aggressive Westernization, driven by the presence of occupying American troops.

In The Mood For Love showed how the ability to buy imported goods was a sign of wealth that many characters expressed excitement and mild jealousy over. Su subtly brags that her husband purchases her trendy handbags from Japan because he does business in Japan; her neighbors agree that she is very lucky.

Beyond Japan, Western influence from British colonialism—especially the styles of the London high streets—also influenced Hong Kong fashion. Hong Kong tailors adapted popular British fashion trends in the 1960s, and incorporated traditional British pieces in everyday wear. While qipaos were historically long and loose-fitting, they became daringly form-fitting with tailored waists and shorter hemlines during the 1960s, reflecting the popularity of together A-line dresses and miniskirts in London. These influences further manifested themselves through transformed, modern qipaos featuring high mandarin collars, side slits, and diagonal fronts with clasping knots. This was a new look for an ambitious new era of social and economic change.

Su Li-zhen’s iconic red trench coat worn over her qipao also shows the influence of Western fashion in Hong Kong. Originally designed for officers serving in the trenches of World War I, Aquascutum and Burberry’s trenchcoat later evolved from the preferred outwear of dashing, upper-class officers, to encompass detectives, journalists, and spies. Films like The Maltese Falcon and Casablanca reinforced this romanticization of the trenchcoat in popular media.

In the Mood for Love exhibits an accurate reflection of evolution in Hong Kong fashion trends stemming from international influence in the 1960s. Even 20 years after the film’s release, the clothing choices in In the Mood for Love influence international luxury brands and honors the unique blend of Eastern and Western cultures present in Hong Kong. 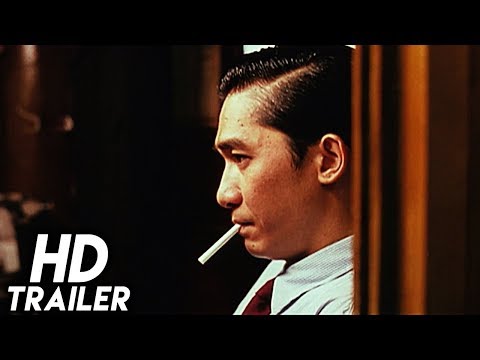