Tian Guan Ci Fu (天官赐福, or Heaven Official’s Blessing in English) is a noteworthy addition to China’s growing anime (known as donghua, in Chinese) industry for many reasons. The series is US animation distributor Funimation’s first Chinese acquisition, and its story revolves around two characters with a very unexpected relationship.

A same-sex romance, front and center

Adapted from a web novel of the same name, Tian Guan Ci Fu (also referred to as TGCF for short) opens with a brief introduction to our main character Xie Lian, a god who ascends for the third time to Heaven after being banished twice before. Though talented in the martial arts and compassionate in nature, he is the laughing stock of Heaven due to his previous mishaps. The first job that Xie Lian is tasked with upon his return is to solve the mystery of the Ghost Bridegroom—a rumored ghost who kidnaps brides-to-be in a remote village.

Up until its second episode, TGCF seems like your typical Chinese mythology, featuring Qi-cultivating gods interacting with the mortal realms. However, in that episode, the gods force Xie Lian to cross-dress as a bride to lure the Ghost Bridegroom. This leads him to an encounter with the mysterious Hua Cheng, who reaches under the curtains of Xie Lian’s rickshaw, offering his hand. Xie Lian takes it instinctively, and is led by this mysterious guide deeper into the forest. The scene frames their two figures as those of a man collecting his bride and taking them home.

At this point, the reader might start to doubt that this series is your typical Chinese mythology after all. Indeed, Xie Lian and Hua Cheng become lovers—and their male courtship forms the endearing heart of the series. That a same-sex romance can come out of a country not known to publicly endorse LGBTQ rights places Tian Guan Ci Fu in a unique spotlight.

China has one of the world’s most tightly regulated media environments, having banned many Western platforms such as Google, Facebook and YouTube from use within its borders. Film and TV production companies must first seek approval from the authorities before their content can be broadcast to audiences. However, an interesting aspect about censorship in China is the vague nature of it, which creates breathing room for often flexible and unpredictable decisions.

The reality is that there is no official or comprehensive rubric of allowed and banned content in Chinese media. Aside from a few topics such as “pornography, separatism, [and] terrorism, for the most part companies are expected to regulate themselves”, and “second-guess whether individual posts or discussions are to be allowed, based on their interpretation of public pronouncements and campaigns.”

The NRTA (National Radio and Television Administration) is the agency in charge of enforcing censorship laws, but “how and when [NRTA] chooses to enforce its authority remains opaque. [NRTA] is notorious for providing vague feedback, with filmmakers navigating a largely informal process to gain approval.” These vague rules result in decisions that could be considered unexpected. For example, Dying to Survive made waves in 2018 by not only highlighting the exorbitant costs of cancer medication in China, but also garnering sympathy from the Chinese government itself. In order to pass censorship regulations, Chinese filmmakers generally relegate social issues to the background, and one begins to wonder if stories like Dying to Survive might become the norm or stay the exception.

The opaqueness of Chinese censorship guidelines (or lack thereof) is also reflected in the constantly flip-flopping relationship between Chinese social media platforms and LGBTQ topics. “After apparently censoring a popular hashtag related to LGBTQ issues, the Chinese social network [Weibo] restored access Tuesday following a major backlash from users.” Though homosexuality is not technically illegal in China, many companies and platforms in China choose to err on the side of caution. So how did TGCF pass the censorship regulation in China? The answer is that nobody knows for sure, though one could speculate as to a couple of reasons.

The fact that Tian Guan Ci Fu is streamed online means that it might be subject to different scrutiny from theatrical or terrestrial network releases; the NRTA doesn’t directly regulate websites. In addition, animated series may receive laxer standards to begin with due to the fact that they appear less true to life. To this point, Mo Dao Zu Shi, a work by the same author as TGCF, was adapted into a commercially and critically successful live action drama called The Untamed. However, while the original Mo Dao Zu Shi web novel featured an explicit romance between the male leads, The Untamed only contained suggestions of homosexuality.

Whatever the reason, censorship guidelines in China remain vague, and the relationship between Chinese media outlets and controversial topics is always in flux.

Another factor that makes Tian Guan Ci Fu unique is that it avoids the frequent queer-baiting of Japan’s anime industry. In Japan, the so-called “boys love” or “girls love” genres are generally targeted toward straight audience members, and depict semi-erotic and suggestive scenes between members of the opposite sex. For example, the series Free! centers around a group of five handsome boys who are members of a swim team. Needless to say, viewers get to enjoy many scenes of the boys sauntering around half-naked, often coming into close physical contact with one another, despite all of them being straight as an arrow.

In contrast, Tian Guan Ci Fu depicts a budding relationship between its two leads in a totally whomesome, non-erotic manner. Throughout the series, Hua Cheng and Xie Lian get to know one another in a way that is gentle, romantic, flirtatious, but nonphysical. This loving portrayal of a same sex relationship has allowed TGCF to stand apart from other animations and attract a fervent fan base that it not only represents, but is also willing to lean into.

TGCF’s deep engagement with its fanbase is unprecedented for a Chinese LGBTQ production. Bilibili, which produced the official TGCF anime and manhua (Chinese for manga), reached out to a team of fans who had been translating the comics into English and asked them to join the official translation team. In addition, the manhua’s illustrator, an artist who goes by the name STARember, has not only captured the attention of her fans for her beautiful embellishments of Xie Lian and Hua Cheng, but also notably drops unofficial artwork online at random times, allowing fans to rejoice in “adorable family scenes, little date nights, canon scenes in the book which haven’t been done in the manhua yet, etc”.

A story that emphasizes compassion

Romance aside, there are plenty of Chinese mythological plot points that unravel alongside the budding romance between Xie Lian and Hua Cheng. When viewers first meet Xie Lian, he comes off as disgraceful given his past banishments from Heaven. As the story progresses, more of his past slowly begins to unfold, and we observe him as a humble, wise character with a genuine desire to help those in the mortal realm, creating an engaging and heartwarming tale that everyone can enjoy.

Tian Guan Ci Fu is an exciting new instance of Chinese animation, and indeed, one cannot help but wonder at what the future of Chinese donghua has in store. 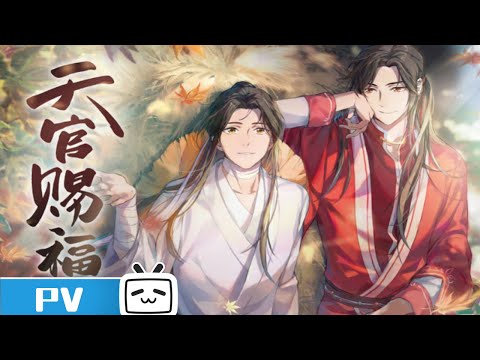