Review: “All U Need is Love” is an Insipid and Vaguely Authoritarian Hong Kong COVID Comedy

2021 Hong Kong comedy All U Need is Love is likely one of the earliest films in the world to make the COVID-19 the central focus of its story. The movie features a star-studded cast of Hong Kong actors and actresses, many of which reprise their best-known roles for the film. This is due to the fact that the movie was originally intended as a collaboration between ten major Hong Kong film companies to benefit a hard-hit domestic film industry. However, All U Need is Love is an insipid affair, which says more about the film industry in Hong Kong today than anything else.

All U Need is Love features a large ensemble cast trapped in a luxury hotel after a snap lockdown quarantines them in the hotel for fourteen days. Among those trapped in a hotel are two rival gangsters, two wealthy elderly men seeking to flee their wives, a couple originally due to be married at the hotel, and many others whose relationships become strained by the lockdown. In the meantime, despite vowing to take care of the guests under these extraordinary circumstances, the hotel owner tries to escape from the hotel, and the hotel manager finds himself growing closer with one of the guests.

Some of these characters are directly drawn from other movies, such as the two elderly men originally being characters from Men Suddenly in Black. Other cameos are drawn from Kung Fu Hustle and Port of Call.

In this sense, All U Need is Love is a highly metafictional movie, involving a significant degree of homage, pastiche, and parody. The film’s general comedic style is drawn from the genre of mo lei tau screwball comedy that Hong Kong is known for, as in the films of Stephen Chow and others. The opening, featuring a guest trying to flee medical workers trying to quarantine him, is homage a parody of Hong Kong martial arts movies from the heyday of the Hong Kong film industry—down to a sequence mimicking Jackie Chan’s famous stunt from Police Story in which he slides down a pole lined with exploding lightbulbs. Other scenes parody shootouts from Hong Kong gangster or police films, for example with the two rival gangsters walking down a hallway while deflecting the thermometer guns of medical workers.

But All U Need is Love is ultimately a clean-cut, sterile affair, in which the past glories of Hong Kong cinema are regurgitated in a highly sanitized form for the present. Indeed, worsening political freedoms in Hong Kong will likely affect the ability of the city’s film industry to take creative risks and filter out any plot elements critical of authority.

Certainly, this seems to be the case with All U Need is Love, which in many respects is rather tone-deaf about its political undertext. At a time of significant distrust in the government following the protests that broke out in 2019 and criticisms of the Hong Kong government’s COVID-19 response as haphazard in nature, All U Need is Love depicts the government COVID-19 response as authoritarian, yet somehow positive and humorous.

The movie presents the Hong Kong government’s response to COVID-19 as inescapable; most quarantine escape attempts fail. The most intriguing attempt is that of the hotel owner, who tries fleeing through the sewer system. On one hand, this evokes how Hong Kong’s wealthy elites have the privileged means to flee the city, while regular people pondering escape have greater difficulties. On the other hand, it offers a fitting meta-reminder about how Beijing has co-opted Hong Kong’s entertainment luminaries. Who else should even materialize to prevent the owner’s escape than Jackie Chan—an actor criticized by Hongkongers as an authoritarian spokesperson for the Chinese government, and who makes a brief cameo in the film ashead of the government’s COVID-19 response.

Some lines said to the bickering newlywed couple also come off as authoritarian in subtext. The groom is urged to accept his domineering bride by another character because “what’s better than having someone arrange everything for you? You may feel it’s suffocating, but it’s a blessing.” If anything, this seems to be the film’s object lesson. The film’s characters eventually all make amends with each other, and become a “family” in the course of their shared ordeal.

All U Need is Love is middling as a film, though it manages to get its job done. But in relying on predictable hits, the story manages nothing original. In this sense, the movie only serves as a document of dire times for Hong Kong’s film industry as a whole. 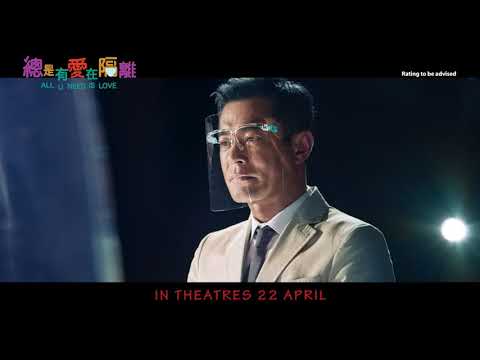