Review: Hong Kong Film “The Way We Keep Dancing” Chooses Not To Sell Out

"The Way We Keep Dancing" sticks to its localist roots and offers a messy but authentic take on Hong Kong’s contemporary spirit.

In summer 2013, a little indie picture called The Way We Dance became Hong Kong’s talk of the town. With a cast of unknown actors, the young adult drama followed a group of university students trying to win a dance competition. Think Pitch Perfect, but danced in Hong Kong. Its youthful, indefatigable spirit resonated with audiences, spawning a million variations of the viral tagline “how far would you go for your dreams?”, and the movie rode its wave to a sizable HK$13 million at the local box office.

Eight years later, a sequel finally arrives. But Hong Kong has changed entirely since. Gone are the days of simplistic, almost naïve tales of dream-chasing and love triangles. Instead, The Way We Keep Dancing dives straight into the city’s inescapable politics. It retcons The Way We Dance as a successful franchise of movies that were shot and released in its fictional universe. The actors have gone from scrawny students to up-and-coming entertainers. So popular are they that a government-backed real estate developer recruits them to be the ambassadors of a gentrification project, and they struggle with the million-dollar question: to sell out or not?

Director Adam Wong has definitely chosen the latter. Despite the ever-challenging moviemaking landscape in Hong Kong, Wong has chosen not to appeal to Mainland Chinese audiences. Instead, he stuck even more firmly to his localist roots, and repackaged his innocent movie into a meta, political web of ideas. The Way We Keep Dancing messily jumps between different modes and storylines, but captures the spirit of HongKongers even better than its 2013 sibling.

The Way We Keep Dancing offers a promising ambition that harkens back to the golden age of Hong Kong cinema. It is not the first Hong Kong movie to conduct meta experiments—see the works of Stanley Kwan and Ann Hui. But arthouse gems like theirs are few and far between. Regardless of execution, Wong’s premise is bold and original. If The Way We Dance and his follow-up high school romance She Remembers, He Forgets marked Wong as a maker of movies with childlike wonder, The Way We Keep Dancing is his rite of passage into the world of adults. Another ripe voice in Hong Kong cinema is born.

Wong isn’t mature just because he has some crazy idea rendering his previous movie moot. The visual style of The Way We Keep Dancing is a big upgrade over Wong’s previous features’. The mise-en-scène is much denser and populated with depth and city iconography. His handheld camera and jump cut editing capture both the fading traces of youth in his actors and the uncertainty of the times. His ventures into the metaphorical—most notably, a shot of a trembling stage that “resolves” the narrative—are clear yet subdued, subtle yet effective.

Politics have always been part of Wong’s movies. The dream-chasing sentiment of The Way We Dance captures the hopefulness of a Hong Kong pre-Umbrella Movement. After the failure of that event, the dual timeline She Remembers, He Forgets was already laced with middle-aged regret of dashed dreams. And now in 2021, The Way We Keep Dancing brings utter helplessness to the surface. Spoiler alert: the movie does not pretend there is an easy answer to its central question. Dancers don’t end up overthrowing the real estate hegemony. Its “keep on keeping on” ending is not a cop-out—it is the only answer HongKongers have to their problems right now.

Wong is careful with his messaging. The Way We Keep Dancing is ostensibly about indie vs. commercial art. The word “Hong Kong” isn’t even uttered (the characters use a made-up nickname instead). But like many recent local Hong Kong movies, the authority vs. people struggle is thinly veiled—it even shares the same conceit of gentrification with Drifting. The euphemisms are slightly disappointing, but The Way We Keep Dancing more importantly carries an authenticity and understanding of HongKongers. Any film or filmmaker who does that is a rare gem these days. Most tellingly, the film was written and shot before the 2019 protests even broke out. It shows that tensions have been simmering in Hong Kong for years.

Unfortunately, Wong’s ambition also leads to The Way We Keep Dancing being his messiest movie to date. Whereas The Way We Dance keeps everyone in the same group, the sequel is divided on purpose. Just as today’s HongKongers are split into several camps, there are many subplots to keep track of: Hana (Cherry Ngan) with her nascent pop star career, Leung (Babyjohn Choi) with his middleman YouTuber business, Heyo (Heyo Fok) with his underground rapper act. This necessitates a high degree of cross-cutting, which topples the movie every time it nears an emotional peak.

Then there are some of the movie’s more experimental segments, most notably a five-minute documentary on the history of hip hop filmed in The Bronx. In another 20-minute stretch, a fictional YouTuber (played by the very real actor-turned-YouTuber Neo Yau) interviews the main characters, who break the fourth wall. There’s nothing wrong with these non-narrative detours, of course. By speaking more directly to the audience, they get right to the heart of Wong’s concerns. But it’s the segues into them that are awkward and forced, almost as if the movie is embarrassed of its experimentations. It might as well embrace them and go even further, if it is already bound to alienate audiences.

That last part turned out to be true, unfortunately. As of its closing, The Way We Keep Dancing has grossed only HK$8 million. That is not only far less than its predecessor, but also a certain loss for its studio Golden Scene. Every time another one bites the dust—a 100% locally financed Hong Kong movie suffers at the box office—the future of native Hong Kong cinema looks even gloomier.

But if there’s one thing that ameliorates the situation, it’s the movie’s artistic reach. No one expected the sequel to The Way We Dance to be less like Step Up and more like Stanley Kwan’s Center Stage. It is revisionist anyway to pretend that Hong Kong cinemagoers championed arthouse—even during its heyday, directors like the aforementioned Kwan, Hui, and the unavoidable Wong Kar-wai were shunned by audiences. But present future has told us that their movies would eventually be reevaluated and embraced. I hope the same fate is in store for The Way We Keep Dancing. 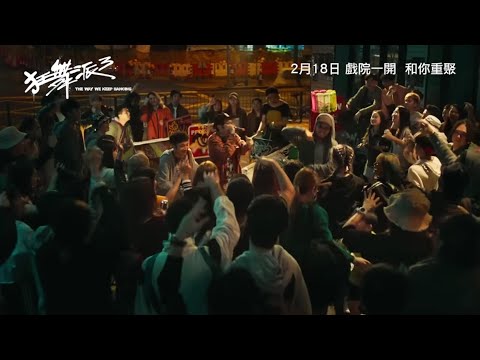 The Way We Keep Dancing screened at the 2021 23rd Far East Film Festival in Udine, Italy. This article is part of Cinema Escapist’s dedicated coverage of that festival.