With "Babi", musician-cum-filmmaker Namewee eschews his usual lighthearted comedy for a jarring yet accessible depiction of tensions between Malaysia’s three ethnic groups.

Malaysian rapper-turned-filmmaker Namewee (real name Wee Meng Chee) is no stranger to controversy. He first rose to prominence in 2007 with a rap parody of Malaysia’s national anthem, which earned him a police investigation and erasure from Malaysian mainstream media. In 2016 he was arrested for allegedly insulting Islam (Malaysia’s official religion) with a music video called “Oh my God,” and detained again in 2018 for a music video named “Like a Dog” that featured him dancing in front of the Malaysian Prime Minister’s office. Despite these incidents, the ethnically Chinese Namewee has remained steadfast in producing work that comments upon relations between Malaysia’s three main ethnic groups—Malays, Indians, and Chinese—in manners that the country’s Malay-dominated authorities find upsetting and can easily condemn to gain political clout.

Earlier this year, Namewee re-entered the headlines— this time over his latest feature film Babi. Named after the word for “pig” in Malay (which is used as an insult), the movie depicts the circumstances surrounding an interethnic schoolyard riot in an unnamed southern Malaysian city. Because the film depicts race relations in a violent and provocative manner, figures associated with Malaysia’s ruling establishment filed formal police complaints that led to Namewee’s temporary detention in March 2021, and his producer’s arrest several weeks ago in July. This is despite the fact that Namewee never applied for Babi to be shown in Malaysia, instead opting for a premiere in Taiwan.

Diehard Namewee fans may find it both familiar and novel. Like most of Namewee’s previous songs and films, Babi questions the status quo of race relations in Malaysia. However, while Namewee’s previous movies—Nasi Lemak 2.0, Bangalasia, and so forth—have all been lighthearted comedies, Babi has a significantly darker tone. While it can feel a bit heavy-handed in some aspects, the film overall constructs an accessible and powerful allegory that should resonate even with non-Malaysians.

Babi takes the form of a slowly unraveling mystery. The film begins in the aftermath of a riot at a secondary school in southern Malaysia with a mixed ethnic population of Malays, Chinese, and Indians. During the riot, an ethnic Chinese student fell to his death from a balcony—and the school administrators have requested the local police investigator to uncover the truth behind both the student’s death and the riot that precipitated it. The investigator begins questioning leading students from each of the three ethnic groups, and it soon becomes apparent through flashbacks that the riot is not just a simple matter of different ethnicities blindly hating each other.

Of course, Babi isn’t just about a simple schoolyard dispute; it’s a metaphor for the state of interethnic relations in modern Malaysia. For those who aren’t familiar with Malaysia: while religiously Muslim Malays make up the majority of Malaysia’s population, ethnic Chinese (and to some extent Indians) have outsized influence over the country’s economy. This has led to jealousy and strife. On May 13, 1969, Malaysia experienced a significant race riot between Malays and Chinese that left hundreds dead, and the nation scarred.

In the aftermath of May 13, Malaysia’s government implemented a set of affirmative action measures called the New Economic Policy (NEP), which advantaged the ethnic Malay majority at the expense of Chinese and Indian minorities. Per the NEP, public companies must have a certain proportion of Malay investors, Malays gain preferential access to educational opportunities, and more. While by some measures this has increased Malay economic participation, and interethnic relations remain cordial at a surface level, the NEP has arguably also cultivated latent tensions by institutionalizing an unequal ethnic hierarchy, and spurred brain drain of ethnic minorities.

Babi dramatizes this landscape in a resonant and accessible manner. For example, we learn that the Chinese student who fell to his death was from an impoverished family, yet couldn’t get a scholarship due to NEP rules around his ethnicity—even though his Malay best friend tried to put in a good word for him. Of course, beyond tragedy, the film also shows pitched violence and bigotry. We see students from different races lobbing stereotypes and insults at each other—Malays telling Chinese to “go back to China,” Chinese implying Malays are savages, and so forth.

While jarring and unpleasant, such scenes highlight unfortunate realities in a manner so direct that they become impossible to ignore, even for audiences less familiar with Malaysia. It’s akin to how the characters of Spike Lee’s renowned American film Do the Right Thing—which dramatized racial tensions in 1980’s New York City—recite racial stereotypes in an infamous montage. Films can’t become socially significant if they don’t make people uncomfortable, and Babi definitely provokes discomfort in a way that makes audiences wonder to what extent such racial tensions still linger beneath the surface in contemporary Malaysian society, just like how Do the Right Thing did for the US.

However, especially in comparison to a nuanced film like Do the Right Thing, there are moments where Babi feels too edgy for its own good. Most notably, the movie introduces an extremely lurid villain that evokes certain sexual undertones from Namewee’s comedic work, and therefore dilutes the character’s emotional impact. Furthermore, Babi doesn’t spend much time developing the motivation and mindset of its antagonists, which seems like a missed opportunity to further explore the complexities of Malaysia’s racial dynamics. The film’s production design is also overwrought in certain moments as well, for instance with excessive amounts of fake blood getting sprayed on the students’ clothes. However, as Namewee had to shoot the film on the down-low with a novice cast and low funding, these oversights are understandable.

Despite its depictions of pitched violence and racial strife though, Babi doesn’t abandon audiences in an abyss. Instead, it ultimately offers a rather bittersweet takeaway. By situating its allegory for Malaysia in a school, it places a degree of hope in younger Malaysians whilst also acknowledging that they are victims of a system that encourages racial division instead of harmony. Even with some narrative imperfections, Babi effectively encourages audiences to question that system—so it’s no surprise that the film has attracted such ire from those in contemporary Malaysia’s political establishment. 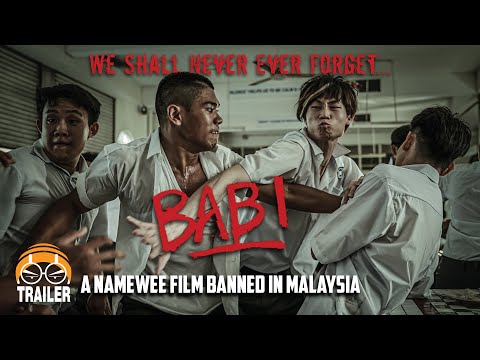