Review: Taiwanese Road Movie “Mickey on the Road” Meanders Along With Static Characters and Implausibilities

Following two women who travel from Taiwan to Guangzhou, Taiwanese movie "Mickey on the Road" makes a praiseworthy effort but is weighed down by a weak script.

Mickey on the Road has the makings of a great film, but fails to live up to its promises. Consequently, it represents much wasted potential for what could have otherwise been a strong entry in the road movie genre.

Mickey on the Road follows its eponymous protagonist, Mickey, and her close friend Gin Gin. Both are working-class young women from the southern Taiwanese port city of Kaohsiung. Gin Gin works as a club dancer, while Mickey works with a temple dance troupe.

Dissatisfied with their lives, the two women decide to set out to Guangzhou, China. Gin Gin is hoping to find her crush, who she originally met in a nightclub in Taiwan but now lives in Guangzhou. Fed up with her mother’s turbulent relationships, Mickey is hoping to find and bring back her father, who lives and works in China and she hasn’t seen in over a decade.

However, the two women find themselves unprepared for traveling in China. After having their luggage stolen soon after departure, the two meet one misadventure after another, and depend on the generosity of new acquaintances in China to get by.

Mickey on the Road is primarily carried by the strong acting of Yeh Pao-wen as Mickey and Chang Ya-ling as Gin Gin. Incidental characters, including Time Liu as a Chinese man that Mickey meets on a bus, are also well-acted. Despite being given little to do on camera when he finally appears, Hsu Yu-chieh does a respectable job as Gin Gin’s crush Jay in his approximately five minutes on camera.

Nevertheless, the movie squanders the talents of its actors through a wooden script and a plot that fails to get anywhere, despite the production crew’s best efforts. Although Yeh and Chang are strong actors, this cannot get around the fact that Mickey and Gin Gin are not well-developed characters.

The characters change relatively little between the start and conclusion of the movie, though the film suggests that their journey is a form of bildungsroman. The audience does not have any particular insight into their interiority—they remain static, two-dimensional characters that go through a journey and seem to come out little changed for it.

The film’s rather strange depiction of China is also worth commenting on. China is depicted only in the terms of opulent wealth and luxury, as compared to Taiwan.The film is overly didactic when it comes to efforts to drive home political differences between Taiwan and China, circling around the point numerous times clumsily. Often this lacks realism. Rather improbably, Mickey and Gin Gin are not aware of Facebook or Google being blocked in China until they arrive. At the start of the film, they even seem rather unclear if Guangzhou is located in China—something rather unthinkable for two Taiwanese young people.

Otherwise, what causes Mickey on the Road to unravel itself are its numerous plot holes, and rather repetitive nature.

For example, after having their luggage stolen, Mickey and Gin Gin are put up for free in a bathhouse by a group of Chinese young people that they befriend in an Internet cafe. This group of friends conveniently happens to work in this bathhouse. However, this group of friends also rather conveniently forgets to clear this with any of their superiors, resulting in Mickey and Gin Gin having to make a run for it. Rather hilariously, their next move is to contact the Chinese man that Mickey befriended on a bus. His immediate response is to put up Mickey and Gin Gin in yet another hotel. The essence of Chinese hospitality towards Taiwanese is putting up near-complete strangers in hotels, apparently.

Other scenes are simply inexplicable. One scene depicts Mickey licking glass that honey is dripping down, while a large dragon looms behind her. Later on in the film, the film’s characters commit violent crimes in China and get away without incident.

In this respect, Mickey on the Road is ultimately a somewhat forgettable movie. Though a praiseworthy effort, the film’s major weakness is its poor script, and this drags down the other elements of the movie. 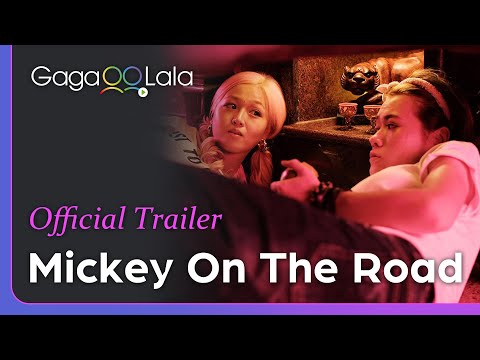 Mickey on the Road screens at the 2021 Asian American International Festival. More information about the festival is available here.