Review: Zombie Movie “Get the Hell Out” Satirizes the Spectacle of Taiwanese Politics

A dash of violence, a pinch of graphic novel-esque visuals—welcome to the world of director Wang I-fan. Wang, a rising talent in Taiwanese cinema, has cultivated a reputation for telling cartoonishly violent, larger-than-life stories through short films. One example is 2020’s Temple of Devilbuster, which depicts an explosive confrontation between two characters rooted in Taiwanese folk belief.  In Temple, vivid neon lights, abrupt cuts in music, fast-paced action, and achronological storytelling evoke the disorienting feeling of being in-between life histories, which reflects the short’s interest in interrogating the multiple lives of reincarnation.

This interest in Taiwan-centric storytelling through eclectic filmmaking carries into Wang’s feature debut. Wang’s political zombie thriller-comedy Get the Hell Out lampoons the spectacle of Taiwanese politics through the lens of a rabies-like outbreak in the chambers of government. Combining cartoonish violence and a deeply irreverent sense of humor, Get the Hell Out both indulges in showing and effectively criticizes the very real pageantry of Taiwanese politics.

Get the Hell Out (逃出立法院, literally Flee the Legislative Yuan in Mandarin Chinese) begins with an introduction to Hsiung Ying-ying, a member of the Legislative Yuan (a.k.a. Taiwan’s parliament). After a high-profile spar over the construction of a new power plant in her hometown (perhaps referencing Taiwanese resistance to nuclear power plants), Hsiung is forced to resign. However, Hsiung remains convinced that the plant will lead to environmental pollution and incubate a new rabies-like virus. To block the plant, Hsiung convinces hapless security guard Wang You-wei to run for her seat and act as her puppet.

Wang acquiesces and wins the seat. However, right before a vote on the plant, a huge legislative brawl breaks out. To help his goons attack other legislators with impunity, pro-plant gangster legislator Li Kuo-chung chains the legislative chamber doors shut. This proves unfortunate when the President of Taiwan suddenly bites the parliamentary presiding officer, sparking a zombie outbreak stemming from the rabies-like virus Hsiung feared. Now Wang You-wei, Hsiung Ying-ying, and Li Kuo-chung must all “get the hell out” and flee the Legislative Yuan before they also turn into zombies. While these political battles might seem exaggerated for comedic effect, they are a key part of Get the Hell Out’s political criticism of Taiwan’s actual legislative fights.

The Spectacle of Taiwanese Politics

Despite Taiwan’s colloquial reputation of being an island of the polite and friendly, the Legislative Yuan is notorious for increasingly absurd scuffles. Legislators don’t just shout at each other; they have thrown food, pulled each others’ hair, and even eaten printed legislation to prevent voting.

Many Taiwanese speculate these fights are at least partially acted as a form of political theater. Such brawls replace dense legislative debates, and signal representatives’ commitments to constituent issues. Taiwan’s sensationalized news media also exacerbates and encourages these fights by elevating spectacle over substantive policy analysis. After the furniture barricades are torn down and food is cleaned up off the floor, tensions often blow over quickly and voting continues.

Get the Hell Out mocks this spectacle by portraying both legislators and news media as hilariously incompetent. In one scene, a group of legislators inadvertently let a wave of zombies into their safe room by reopening the door to kick a peer out. Likewise, news media show viral footage of the President becoming infected as a comedic fluff piece, and animate him spinning around an image of outer space. In both institutions, spectacle supersedes responsibility.

However, the spectacle is not limited to battles on the legislative floors.

Gangster legislator Li’s lackeys include an official dressed as a Taoist priest. This seems like a nod to eccentric Taiwanese candidates like Huang Hongcheng Taiwan A-cheng , who has become meme-ified as a result of strange dress and bizarrely affected speeches. More concerningly, Get the Hell Out also depicts the very real influence of lawmakers with ties to large crime syndicates. Selfish gangster legislators like Li threaten the health of Taiwan’s democracy by burdening peaceful protestors with heavy charges, threatening war against political dissidents, and otherwise selectively leveraging the justice system against their enemies. It’s an even more pernicious form of “legislative violence” than food fights, and one that makes a stark appearance in Wang’s zombie thriller-comedy.

A Virus of Idiocy

To emphasize the absurdity of Taiwan’s political climate, Get the Hell Out’s characters call the new zombies baichi (白痴), a Mandarin insult roughly translating to “idiot.” This commentary about “idiocy” in Taiwanese democracy isn’t exactly subtle. However, its heightened reality and whimsical sense of humor makes it clear that it’s not trying to be.

While the zombie-fied president mauls legislators in a Tarantino-esque bloodbath, for instance, his bodyguards patiently wait behind him, drenched in blood while ensuring no harm comes to their undead boss. The film’s naked critiques of over-the-top Taiwanese legislators and sensationalist news media, though, manage to effectively ground its otherworldly style. Like a politician throwing a water bottle at an opponent, Get the Hell Out compellingly drenches its political criticism in flash and drama.

The film indulges in a visual spectacle of its own by leaning into a campy sense of humor, internet celebrity cameos, and a cult B-movie aesthetic. Frequent fourth wall breaks incorporate internet memes and make diegetic typically non-diegetic elements of filmmaking. For example, when a scared security guard needs to steel his resolve to fight against the zombies, he sings a military anthem to himself. The film then imposes karaoke lyrics over the screen that further exaggerate the guard’s absurd predicament. Likewise, at a pivotal dramatic moment, the film inserts a “To Be Continued” meme lifted straight out of the anime JoJo’s Bizarre Adventure.

Though this loud visual style might read as distracting or shallow to some audiences, Wang showcases a literal representation of the spectacle of politics exaggerated to absurd levels. This in-your-face absurdism is not just aesthetic, but also a criticism of the ridiculousness of Taiwan’s actual parliament. Get the Hell Out’s irreverent depiction of an actual institution cleverly asks Taiwanese audiences to consider how exaggerated its world actually is.

Wang I-Fan’s Get the Hell Out effectively criticizes the spectacle of Taiwanese politics through his characteristic fast-paced, action-packed, and eclectic filmmaking style. The movie is an absurdist spectacle—which helps draw attention to the absurdities of Taiwan’s real-world government. By couching this critique in the medium of a cult movie, Get the Hell Out also ensures general audiences can understand its message.

Underneath the film’s whimsical spectacle and silly humor lies a sincere concern over political theater in Taiwan’s Legislative Yuan. In a brazenly blunt allegory, Get the Hell Out‘s characters realize that stopping the virus of parliamentary idiocy will require destroying and rebuilding a flawed institution. Even if those characters live in an exaggerated and cartoonish world, this process of reform seems as slow, difficult, and contested as political struggles in the real world. 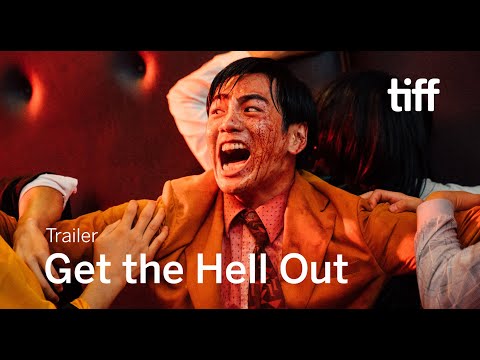 Get the Hell Out screened at the 2020 Toronto International Film Festival.