"Bandar Band" offers a portrait of young dreamers clinging to hope as they navigate through an environmental crisis in Iran.

For two months in 2019, widespread flash flooding affected 26 of Iran’s 31 provinces. The floods caused at least 70 deaths, displaced tens of thousands of citizens, and destroyed nearly 2,000 cities and villages. This catastrophic event forms the backdrop to Manijeh Hekmat’s fourth feature film—and second return to Toronto—Bandar Band, which follows a group of musicians as they attempt to make it across horrendous flooding in Khuzestan province to perform in a musical showcase in Tehran. With documentary-esque visuals and a soulful soundtrack, the film offers an empathetic and measured look at dreams amidst disaster.

Cramped together in a small van, Amir (Amir Hossein Taheri), his heavily pregnant wife Mahla (Mahdieh Mousavi), and their close friend Navid (Reza Koolghani) contend with the flooded roads of southern Iran. With their homes and most of their possessions destroyed, their only option is to proceed to the music competition in Tehran. However, they must make it to Tehran by evening, and recent flooding won’t make their path easy. The trio must deal with washed away roads, officials at checkpoints, and more.

Despite their initial optimism, Amir, Mahla, and Navid’s journey becomes a vicious cycle of diversions, pit stops, and finding roads beneath the water. The van, at times, feels incredibly claustrophobic as the trio spend the majority of the film confined to this newfound vehicular refuge. Hekmat’s long establishing shots from the van’s backseat further enhance the film’s documentary feel.

Navid observingly despairs, “Is this a flood or a monster? It has devoured everything.” The radio fills the van with news of drowned trees, destroyed villages, dwindling supplies at camps, and evacuations taking place. Still, Bandar Band feels infused with life and Hekmat is careful to never have a silent frame—when the music is scarce, the news is on, informing the viewer of more tragedy. However, evoking Oualid Mouaness’ 1982, or Arab and Tarzan Nasser’s Gaza mon amour, Bandar Band doesn’t let its tragic setting overshadow the trio’s emotional and transformative road trip. Cinematographer Sajjad Avarand plays a key role in ensuring the film doesn’t fall into abject bleakness by capturing the beauty of whatever landscape the trio encounter.

Though the film’s press materials don’t provide details, Bandar Band was probably filmed amidst or immediately after the 2019 floods: the waterlogged roads and destroyed bridges it depicts feel too real, and too numerous. If the film wasn’t made during the floods, then it represents an even bigger triumph of production design. One can only feel awed at the complex planning that Avarand and Hekmat must’ve gone through to paint this realistic yet empathetic picture of mass disaster.

For example, as part of this authentic portrayal, Bandar Band’s protagonist trio evacuate children and help deliver relief supplies to flood-stricken areas. These scenes feel both believable and empathetic; perhaps some of these efforts were real, as opposed to purely staged for the film. In a particularly poignant scene, the trio stop to help Mahla’s now homeless Aunt Mitra (Pegah Ahangarani), and her family, out of her destroyed neighborhood. As Mahla and Mitra get stuck in the knee-deep mud, they joke about the outfit Mahla should wear onstage. Hekmat frames this precise moment through the doorways of the devastated homes as the women laugh in the mud outside. It’s a brief but telling look at the strength and resilience of the human spirit, and it’s Bandar Band at its most touching.

Furthermore, as the group encounters detour after detour, music is always present. The film’s fantastic soundtrack features a colorful mix of traditional folk songs, Louis Armstrong, and tracks by Iranian music group Bomrani. The trio continually sing to maintain hope, and Bandar Band’s light-hearted tone and inspiring spirit steers the film away from utter despair. This is due, in no small part, to Taheri, Mousavi, and Koolghani—who have created three real and likeable portraits of young dreamers. Their casual scenes together in the van are entirely believable, their chemistry together natural and effortless, and their shared musical passion is infectious.

Bandar Band’s meditations on hope amidst challenging circumstances feels quite relevant at both local and global levels. Director Hekmat states in her Toronto International Film Festival press notes that she intended to depict the plight of Iran’s youth as, “a generation that has learned how to live very well but has often had their hopes and dreams in life met with closed roads and broken bridges.” Over half of Iran’s population is under 30 years old, and younger Iranians often crave a “normal” life in line with their counterparts in other countries. Yet, crippling international sanctions and economic malaise have stunted their hopes and dreams. An endless flooded landscape with no exit in sight seems like an apt metaphor for such struggles.

Global warming also lurks in the frames of Bandar Band. Environmental scientists believe that widespread and unregulated deforestation in Iran is responsible for the rise in major flooding in recent years. Iran’s Natural Resources and Forestry Organization has estimated that, in the past 40 years, the northern forests area in Iran has been reduced from 3.6 million to 1.8 million hectares. Bandar Band puts this terrifying truth into an accessible cinematic format, and reminds us how climate change—and its effects on the younger generation—affect all nations.

Despite the severity of the crises it depicts, Bandar Band remains a charming and likeable road trip movie. Director Hekmat and co-writer Mostafa Zandi have injected their leading characters with heartening hope in the face of hardship, allowing the core trio to truly shine. While the poetic ambiguity of the film’s ending does fail it somewhat, Bandar Band is a delightful film about hope, dreams, and the obstacles we all must face to maintain both. 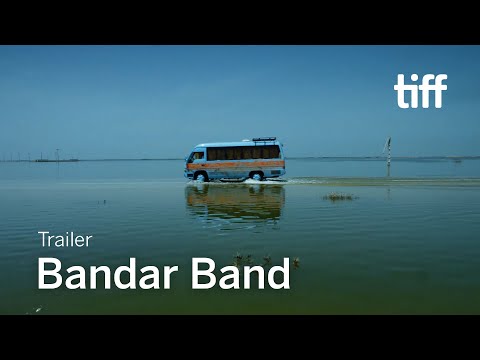