Based on Ryszard Kapuściński’s eponymous book, “Another Day of Life” blends animation and documentary to vividly relive history.

Just from its opening minutes, you can tell Another Day of Life won’t be your average movie about conflict. In this adaptation of Polish journalist Ryszard Kapuściński’s eponymous book, rotoscope-animated reenactments blend with live action documentary to weave a nightmare-esque retelling of the Angolan Civil War’s early stages. Perhaps retelling is too weak of a descriptor. The film almost relives the war in such a compelling way that the judges at 2018’s Cannes Film Festival awarded it L’Œil d’or, le prix du documentaire.

“There was no way I wasn’t going to be here.”

One of the Cold War era’s most renowned journalists, Ryszard Kapuściński garnered praise from the world over for his literary prose and spellbinding coverage of conflict regions. One of Kapuściński’s assignments was covering the Angolan Civil War in 1975 on behalf of Poland’s state press agency. This experience eventually inspired a non-fiction memoir called Another Day of Life, in which Kapuściński applied his trademark magical realism to depict the Cold War proxy conflict between the socialist MPLA and CIA-backed FNLA factions on the eve of Angola’s formal independence from Portugal.

Following in the memoir’s footsteps, the film Another Day of Life situates Kapuściński as a narrator and main character who guides us through an animated past. Initially trapped in Angola’s capital Luanda, Kapuściński desperately wants to reach the civil war’s southern front before Angola’s independence. There, he hears, lives a legendary MPLA commander named Farrusco who might be the ultimate scoop.

At the outset, Kapuściński’s journey to find Farrusco might feel like the hunt for Kurtz in Apocalypse Now and Heart of Darkness. It may also evoke comparisons with members of the “journalist with nothing to lose in a foreign country” sub-genre—Salvador, The Year of Living Dangerously, The Killing Fields, and, to a lesser extent, Good Morning, Vietnam come to mind.

However, rather than focusing on the hollowness of mankind or tingeing the narrative with romance, Another Day of Life explores how Kapuściński balances his drive to expose injustice with the mental demons and ethical obligations that come with being a conflict journalist. True to Kapuściński’s magical realist prose, directors Damian Nenow and Raúl de la Fuente achieve this by translating traumatic nightmares and fantastical musings into vividly rotoscoped animations.

On this front, Another Day of Life evokes a more unexpected comparison—with Inception. The film’s colorful animations often depict surreal landscapes where characters float through what resembles the opening sequence of a James Bond movie. Buildings, faces, and disassembled memories drift through the frame in a reminder of lives wasted or displaced.

These surreal animations then often cut to live action footage; nightmares, dreams, and reality all blend together in an extraordinary reflection on history. Nenow and de la Fuente tracked down many of the real-life figures who assisted Kapuściński on his journey to find Farrusco, and filmed at locations in Angola that Kapuściński traversed.

As the animation visits a locale or mentions an individual, we’re treated to a live action interview or establishing shot from the present day. Kapuściński’s animated flights of fancy become anchored in testimony from an empathetic set of supporting characters—weary revolutionary Artur Quieroz, hypervigilant Angolan journalist Luis Alberto Ferreira, and beyond.

This unique storytelling technique—which Another Day of Life executes far better than similarly structured films like American Animals—allows the film to better grip viewers and reminds them of just how real and recent the Angolan Civil War was. As the film’s postscript reminds us, the war only ended in 2002 with one million people displaced, and a further 500,000 dead. By blending live action and animation, Another Day of Life presents the war as less a flashback and more of a nightmare that continues to haunt many to the present day.

As Kapuściński narrates in the film: “You must save something if you can. Because people disappear without a trace. Completely and irretrievably. From the world, and then from our memory.” In a way, Another Day of Life represents an attempt to do just that, to save a piece of history so that we are not doomed to repeat it.

Underlying Ryszard Kapuściński’s—and Another Day of Life’s—magical realist style is a recognition that even journalists can’t always stay as observers of history; journalist or not, all humans are actors in a broader historical narrative. While Another Day of Life doesn’t preach for any political agenda, its choice to eschew a distant Ken Burns-style retrospective in favor of a more visceral approach dares viewers to confront history rather than forget it.

“[Africa’s] history has been anonymous, now it needs a voice,” Kapuściński reminds us. Perhaps films like Another Day of Life will carry that voice farther and louder. 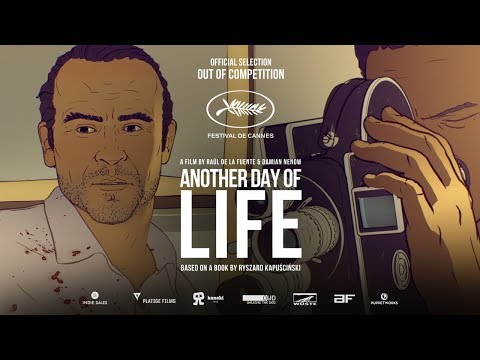 Another Day of Life screens in select US theaters starting September 13, 2019.