Auteur Jia Zhangke tells a literary history of post-1949 China in his latest documentary “Swimming Out Till the Sea Turns Blue.”

Perhaps today’s most renowned Chinese independent film director, Jia Zhangke is back again this year with Swimming Out Till the Sea Turns Blue. It’s his first documentary in a decade, and the capstone to a trilogy (alongside Dong and Useless) about modern Chinese artists. Swimming Out Till the Sea Turns Blue outlines the literary history of post-1949 “New China,” weaving together the lives of four writers who represent different periods of the People’s Republic.

Like with Jia’s narrative features, the documentary aptly highlights what’s left behind in the wake of China’s rapid modernization: rural life, local dialects, memories of past tragedies like the Cultural Revolution. However, most cinephiles may find Swimming Out Till the Sea Turns Blue much less accessible than Jia’s regular features. The film presumes familiarity with the authors it depicts, and will carry much more meaning for those with an existing passion for Chinese literature, culture, and history.

From its structure alone, Swimming Out Till the Sea Turns Blue signals its intention to cater to Chinese literati as opposed to Western elites (let alone broader, mass-market audiences). The documentary consists of 18 “chapters,” which Jia describes in New York Film Festival press notes as an attempt to emulate the many-chaptered nature of China’s classic novels (most of which have hundreds of chapters).

The film divides those chapters across four post-1949 writers. While all the writers share Jia’s passion for exploring life on New China’s rural margins, each represents a different province and time period.

Unfortunately for international audiences, Swimming offers absolutely no background on these writers’ works, styles, and reputations. Instead, it dives right into their intimate personal biographies, sprinkling passages from their writings and shots of China’s modernization (ex. kids playing with smartphones) in between. The film assumes that the viewer already has the context to figure out how those biographical details influence the writers’ oeuvres, and how the writers’ works contrast with China’s modernizing trends.

For better or for worse though, Swimming’s depiction of each writer seems consistent with the tone of their work, and the strength of their reputation.

Swimming’s first featured writer is Ma Feng (马烽), a native (like Jia) of Shanxi province. Ma joined the Chinese Communist Party in 1938, and had his most productive period in the two decades before the Cultural Revolution, writing mostly about the experiences of rural peasantry. Since Ma died in 2004, Swimming only features his family members, who reflect upon his life in retrospect.

Of the four writers, Ma has the least renown in both contemporary China and the West. Correspondingly, his section feels the least accessible; audiences get second-hand sketches of the man’s personality, but have no idea why they should care about him. Even Chinese viewers seem to agree. One commenter on Douban (China’s IMDb) remarked that “those unfamiliar with Ma Feng will have a pretty subpar experience,” while another called Ma’s portion “inharmonious with the rest of the film.”

Next comes Jia Pingwa (贾平凹, no relation to Jia Zhangke), who is best known for tragicomedic novels like Ruined City set at the margins of his native Shaanxi (陕西, different from 山西 Shanxi). Born in the 1950s, Jia spent his late teens and twenties getting traumatized by the Cultural Revolution. In Swimming, Jia sternly recounts getting “sent down to the countryside” to build reservoirs, and how his father was accused of being a Nationalist spy.

Jia Pingwa’s account is harrowing, but requires knowledge of Chinese history in order to fully appreciate. However, those who do understand Chinese history, and have some familiarity with Jia Pingwa’s works, will probably feel that his onscreen accounts of Cultural Revolution tragedies and use of Shaanxi dialect (in fact, the “wa” in Jia Pingwa’s pen name relies on a Shaanxi dialect pronunciation of the character 凹, which is “ao” in Standard Mandarin) embody the same dark, Shaanxi-inflected essence as his writing.

Yu’s section feels the most accessible. He jokes about becoming a writer in order to have a job where he could lounge around during the workday, and effusively describes how he made himself feel rich by saving per diems from his first writing assignment. Audiences who know nothing about Yu or China can still appreciate this dynamism and good humor. This feels fitting since, of the four authors, Yu likely has the highest international profile.

Finally, we meet Liang Hong (梁鸿), who was born in Henan during the 1970s—and didn’t have as much direct experience with the Cultural Revolution. Liang is the documentary’s only female subject, and she spends most of her screentime recounting family tragedies that eventually influenced her writings on village life in Henan.

After Yu Hua’s relatively light segment, Liang’s section returns Swimming Out Till the Sea Turns Blue to the more grave and wistful tone of Ma Feng and Jia Pingwa’s portions. Liang’s accounts of her sick mother and ruinously compassionate father provide some tear jerking moments, and feel like an appropriate reflection of how her oeuvre explores how the countryside has become both a burden and a blessing to China’s urban core.

Past to Present, Country to City

As it screens in the New York Film Festival and beyond, Swimming Out Till the Sea Turns Blue will likely not get the same Western attention as Jia Zhangke’s narrative features. Pretty much everything about the documentary requires deep knowledge of Chinese language, literature, and history to fully appreciate—from the regional dialects that different authors use, to their personal recollections of historical events. Only Chinese literati, or non-Chinese who have studied China at a high academic level, will likely meet those criteria.

However, there’s nothing wrong with that situation. Though it’d be great for China’s soft power if they did, Chinese films have no inherent obligation to please international viewers. In fact, Chinese audiences probably need to see Swimming Out Till the Sea Turns Blue more than global ones. A more important point is whether the documentary feels accessible to enough Chinese viewers; this would take a whole other article to address. While it’s important for people to understand their own culture, China’s lack of democracy creates disincentives around having “the masses” become too familiar with literary figures that sometimes run afoul of the government.

For now, Beijing seems to feel that Swimming Out Till the Sea Turns Blue strikes a good enough balance at tying literati to their motherland whilst not giving too many laobaixing dangerous ideas. As a sign of this, state media published a long interview with Jia Zhangke about the film earlier this year.

In the interview, Jia aptly reflects: “In the past, China was a predominantly agricultural country. Even after we’ve urbanized, our past life experiences are still affecting our lives today. In order to understand contemporary China, [we Chinese] need to go back to the founding of New China. This means going back to the countryside, and tracing how the patterns of our past lives have influenced the present. By putting such details into narrative form, writers help reacquaint us with these past lives.” 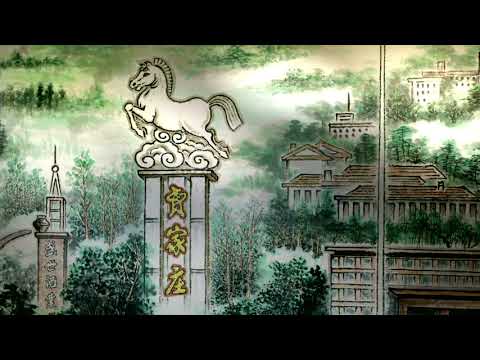