“The Great War of Archimedes” is a cerebral and self-aware addition to Japanese popular media about the famed battleship Yamato.

War movies don’t usually focus on budget negotiations. But that’s exactly what Japanese blockbuster The Great War of Archimedes does. Despite opening with sweeping scenes of US Navy aircraft attacking the renowned WWII battleship Yamato, the film devotes most of its attention to battles of a more bureaucratic nature—namely, the financial and administrative wranglings that led to the Yamato’s existence.

This fictionalized premise is unusual, to say the least, and will give viewers with white collar jobs a dry and perhaps uncomfortable sense of amusement. Yet, by focusing on the cerebral corporatism behind Japan’s pre-WWII military-industrial complex, The Great War of Archimedes becomes a refreshingly self-aware commentary on Japan’s militarism and contemporary national ethos.

Building the world’s biggest battleship takes a lot of taxpayer money. Exactly how much is a lot though? That’s up to Tadashi Kai to figure out.

It’s 1933, and Kai has just been expelled from the University of Tokyo. Kai’s a mathematical genius, but also a bit odd—he has an obsession with measuring and quantifying everything he sees. In fact, he was expelled because he got caught using a tape measure to find the silver ratio in the facial features of his wealthy industrialist patron’s daughter.

Despite this, Kai catches the eye of none other than famed Imperial Japanese Navy Rear Admiral Isoroku Yamamoto—who needs someone with immense mathematical talent to fight an important budgetary battle. Another faction of the navy has just proposed building the world’s biggest battleship (a.k.a. the future Yamato), and gives it a disingenuously low price tag.

Yamamoto needs to sink this battleship before it’s even built. He believes battleships are obsolete in a world with aircraft carriers, and sees this particular battleship as an embodiment of hubris that will lead Japan into an unwinnable war with the United States. There’s a budget approval meeting in two weeks: if Yamamoto can prove the battleship is prohibitively expensive and that the faction advocating for it doctored their pricing proposal, then he can stop not only its construction, but also Japan from going to war. Unfortunately, it’ll take a genius to generate a more accurate, competing cost estimate.

That’s where Kai comes in. Appealing to his sense of pacifism and disdain for military authority, Yamamoto convinces Kai to take on this administrative task of epic proportions.

Everything Has a Cost

If this premise is making you chuckle or scratch your head, you’re not alone. There’s a reason why most war movies focus on combat: it’s inherently entertaining and dramatic. Even films that depict the more intellectual side of conflict—say The Imitation Game—at least fertilize their narratives with cool-sounding struggles like breaking the Enigma code.

By situating its plot atop a foundation of budgetary math, The Great War of Archimedes storytells on hard mode; most people find accounting about as interesting as watching paint dry. While it’s possible to make budgetary shenanigans sound interesting, it takes a huge amount of constant effort, like gnawing meat scraps off bones instead of buying a steak. It’s hard to imagine anybody creating a mind-blowing meal with bones, just as it’s almost impossible for The Great War of Archimedes to achieve any sort of epic status.

Admittedly, the film still does pretty admirably amidst these constraints; it’s still a competent story. Kai is a decently fleshed-out character, who grows as the movie throws a series of escalating challenges at him, and this retains audience sympathy and interest. His quirkiness also prevents the movie from getting too dry; it’s a lot more fun to watch someone examine warships with a tape measure than to see them file requests in triplicate for official blueprints.

Alas, it’s hard to forget that this entire movie is centered on an exercise familiar to many in the white collar world: presenting cost estimates to convince leadership about either funding or killing a project. As Kai scampers around collecting data and blackboarding out calculations, office workers may feel that their work lives are being uncannily and overdramatically emulated in the movie.

In fact, there’s even a Japanese article arguing that tech industry data scientists should watch The Great War of Archimedes because it’s full of tips for how to more effectively leverage data in a corporate environment. If you’re someone who finds deep love and meaning in your white collar job, then you might chuckle at all this in joyful solidarity. But if you watch movies to escape your job, you may instead laugh with the same dry, uncomfortable amusement you’d get from watching corporate propaganda about hustle culture.

Narrative construction aside, focusing on the more cerebral, corporate side of the Imperial Japanese Navy allows The Great War of Archimedes to occupy a novel and noteworthy place in Japan’s social discourse. After WWII, the US forced Japan to demilitarize; Japan famously renounced offensive warfare in Article Nine of its new constitution, which is still in effect today. The battleship Yamato became one of the most popular inspirations for media that grapples with Japan’s post-WWII national identity and military legacy. This is heavily due to the Yamato’s tragic demise. Named after a term used to describe the Japanese race, and seen as a paragon of Japan’s military might, the battleship ended up barely firing its main guns before getting pummeled to death by an onslaught of carrier-borne US aircraft in April 1945. The sinking of the Yamato became a metaphor for the death of Imperial Japan, and the rampant militarism and blind hubris that came with it.

Accordingly, Yamato’s subsequent recreations in popular culture—whether as an Earth-defending spaceship in anime franchise Space Battleship Yamato, a US Navy-attacking nuclear submarine in the manga Silent Service, or a ship full of teens whose lives were tragically cut short in the 2005 live action movie Yamato—represent attempts to reimagine contemporary Japan’s sense of nationhood, and relationship with war.

At the outset, The Great War of Archimedes seems like a straightforwardly anti-war movie, with the thoroughly pacifist Kai coming on board to stop Japan from building the Yamato and provoking WWII. However, like with most media inspired by the Yamato, the film introduces more layers of nuance and becomes a more complex exploration of Japan’s national ethos.

It’s not a spoiler to say that, somehow, Kai doesn’t succeed at stopping the Yamato from being built. The Great War of Archimedes makes it painfully obvious in its very first scene that WWII will break out, and the Yamato will end up not only existing but also meeting a horrible end. Why Kai doesn’t succeed becomes the movie’s driving question.

Answering this question is where The Great War of Archimedes shines. Looking at the construction of Kai’s character reveals some telling insights. In many ways, Kai is the antithesis of a stereotypical Japanese: he’s a youthful maverick who sticks out from the crowd, and disdains hierarchy as he navigates a staid corporate jungle. Importantly, the movie frames him as exactly the kind of person who can save Japan from itself. Unfortunately, an old boy’s club of conservative, blustering gerontocrats do not want him to succeed.

This has biting echoes of contemporary Japanese society—where political and corporate leaders are mostly old, the young are mostly hopeless, and jingoism is on the rise amidst economic stagnation. The movie goes even further than this though. Without giving too much away, The Great War of Archimedes’ final scenes suggest that Japan is so hopelessly complacent that only an act of through and traumatic destruction at a national scale could jolt it awake to become something better.

A Movie with Guts

All this pointed social critique seems quite intentional and premeditated. The author of the anime that The Great War of Archimedes was adapted from told Japanese media that he was inspired to create the story after hearing about the ballooning costs of Japan’s new 2020 Olympic National Stadium. He struggled to understand how Japanese society could allow so much spending on this symbolic boondoggle—and was reminded of how much Japan spent on the Yamato. This comparison seems especially prescient now that the Tokyo 2020 Olympics, another expensive project meant to bolster Japanese national pride, might end up as much of a debacle as the Yamato given rising calls for cancelation amidst the COVID-19 pandemic.

These days, Japanese cinema can often seem as stagnant as Japan’s economy. Long gone are the days of Kurosawa and Ozu; anime franchise sequels, yawn-inducing slice-of-life stories, and spineless quasi-political flicks drown out the few gems that occasionally pop up. While its office politics premise may reduce its epicness and ability to cater to escapism-seeking moviegoers (as well as explain why the film only did modestly at Japan’s 2019 box office), The Great War of Archimedes at least has guts; that’s exciting in and of itself. Those interested in Japanese history and politics should take note. 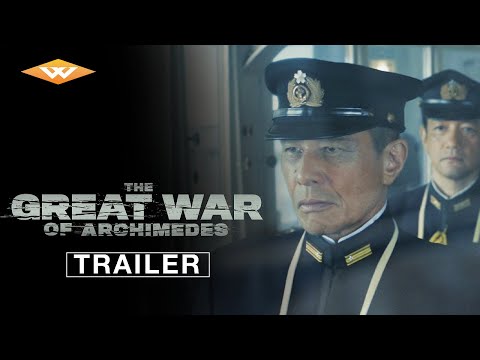 The Great War of Archimedes releases on June 15, 2021 across various streaming platforms (and also on DVD/Blu-Ray) for viewers in the United States.